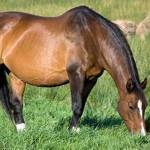 Most broodmare owners know that tall fescue should be avoided during late gestation. While tall fescue serves as a useful forage for nonpregnant horses, pregnant mares consuming endophyte-infected tall fescue can suffer an array of problems, including:

Examples of ergoline alkaloids potentially responsible for reproductive problems include ergonovine, ergovaline, and ergotamine, among others. In cattle exposed to these chemicals, blood vessels in the lower limbs constrict, known as vasoconstriction, resulting in sloughing of hooves in cold locales and increased body temperature in warm regions.

While horses do not react as severely as cattle following exposure to ergoline alkaloids, studies show that vasoconstriction in the lower limbs occurs, as does coolness of the extremities, in horses. In addition, horses show excessive sweating and delayed recovery from exercise in hot conditions, likely due to decreased capacity for evaporative cooling because of limited blood flow to the skin.

Considering the vasoconstrictive effects of ergoline alkaloids, one group of researchers recently hypothesized that vasoconstriction in the uterus may explain reproductive dysfunction in mares consuming endophyte-laden fescue. To test this theory, the research team isolated uterine arteries from mares and, in a laboratory setting, assessed arterial constriction when exposed to various ergoline alkaloids. Arteries and veins from the lower limbs were also tested.

As expected, ergot alkaloids caused vasoconstriction in limbs. In contrast, uterine arteries did not constrict following exposure to ergoline alkaloids, suggesting the â€œeffects of ergot alkaloids on fetal development may not be a consequence of restricted blood flow.â€

â€œThe truth is, we still donâ€™t know which molecules found in tall fescue cause reproductive dysfunction or how exactly these chemicals exert their negative effects,â€ summarized Crandell.

She added, â€œBest practices include avoiding tall fescue in all late pregnant mares, not just as pasture but also as hay. If you are unsure what tall fescue looks like or what else to offer your mares if avoidance is impossible,, consult with a KER nutrition advisor.â€