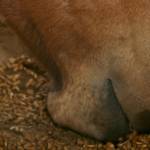 Feeds for performance horses have traditionally contained high levels of nonstructural carbohydrates (NSC). It is a common belief in the horse industry that these types of feeds affect behavior by causing some horses to be high-strung or excitable. Because docile behavior and tractability are key components in a wide range of equestrian disciplines, feed manufacturers have begun to manufacture horse feeds with lower NSC levels. Few studies have measured tangible differences in behavior in horses fed low-NSC diets.

Heart rate variability (HRV) records the fluctuations between successive heartbeats, thereby measuring the function of the autonomic nervous system. HRV has been successfully used to study stress and behavior in humans and other species of livestock. This study examined the effects of NSC levels on equine stress and behavior using HRV indices.

Two feeds with different NSC levels (20.36% or 51.41%) were used in a four-week switchback study using four mature Thoroughbred geldings. The feeds were fed at levels calculated to supply a similar intake of digestible energy (DE) and there were no differences in weight change in the horses when fed either diet. It was hypothesized that HRV indices would be higher with low NSC intake, indicating increased parasympathetic tone and a calmer demeanor. HRV data were collected using a Polar heart rate monitor and an iOS-based Heart Rate Variability Logger (Marco Altini), and analyzed using paired t-tests.

There were no significant differences between low- or high-NSC diets for the mean of RR-intervals (AVNN), standard deviation of RR-intervals (SDNN), square root of the mean squared difference of successive RR intervals (rMSSD), low-frequency power (LF), high-frequency power (HF), low-to-high frequency power ratio (LFHF), and average heart rate (AvgHR). The proportion of pairs of RR intervals that differed by more than 50 ms (pNN50) were significantly higher (P < 0.05) for the low-NSC diet compared to the high-NSC diet. A higher pNN50 is indicative of increased parasympathetic nervous system activity that has been associated with decreased stress and a more relaxed state. This study suggests that NSC content of feed may affect behavior in horses.

What Are the Effects of Nonstructural Carbohydrate Intake on Glycogen Repletion After Intense Exercise?

Antianxiety Supplements: Do They Work In Horses?