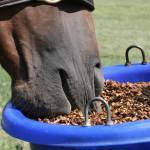 “Studies show that the gastrointestinal tract and central nervous system, the latter of which includes the brain and spinal cord, communicate with each other, tempting researchers to wonder whether it is possible to change behavior by controlling the microbiome,” explained Kathleen Crandell, Ph.D., a Kentucky Equine Research nutritionist.

Research on humans provides insight into this theory. Patients with depression have less diverse fecal microbiota compared with healthy individuals, indicating a causal relationship between overall diet quality and the occurrence of depression or anxiety may exist.

To explore this theory in horses, a group of French veterinary researchers* induced microbiome changes in the intestinal tracts of horses through dietary manipulation. Horses were offered either a 100% hay-based diet or a high-starch diet composed of 56% hay and 44% barley. Once acclimated to the diet, all horses underwent two different stress tests.

The first was a novelty test in which horses were placed in a familiar pen with a bucket of feed. A novel object was then placed in the pen. The horse’s response to this novel object was recorded, including whether or not it would continue to eat, remain vigilant (immobile with head in an upright position, ears immobile and tail slightly raised), smell the floor, interact with the novel object (head and ears oriented towards the object, blow (high-pitched sound produced as the horse exhales through the nose), or move freely around the pen.

The second challenge involved the umbrella test, in which the horse entered the test pen and was then subjected to the sudden opening of an umbrella. Researchers assessed response using the same parameters described above.

According to the researchers, “Behavioral responses of anxiety were related to hindgut microbiota indicators of a high-starch diet. Dietary-induced modulation of the gut microbiota composition may have changed the horses’ behavioral reactions in stressful situations.”

“Optimal nutrition tailored to your horse’s unique lifestyle will maximize health, quality of life, and potentially modify its behavior to reduce the negative influence of stressful situations,” relayed Crandell.

She added, “Consult with a Kentucky Equine Research nutrition advisor for assistance. Be certain to ask about Triacton, a triple-action supplement designed to buffer the stomach, prevent changes in hindgut pH, and support skeletal health.”

*Destrez, A., P. Grimm, V. Julliand. Dietary-induced modulation of the hindgut microbiota is related to behavioral responses during stressful events in horses. Physiology and Behavior. In press.

Role of Vitamin E in Equine Nerve and Muscle Health