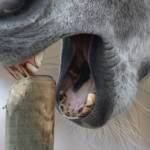 Stereotypic behaviors such as weaving, cribbing, and stall-walking occur commonly in high-performance horses as well as many companion horses. In addition to being unsightly, potentially damaging to the barn, and raising welfare concerns, stereotypic behaviors also result in important health issues such as dental disorders, temporohyoid joint damage, poor performance, weight loss, and colic.

“Cribbing is the most troublesome of these compulsive behaviors. It involves grasping a fixed object with the incisor teeth and aspirating air with an audible grunt,” explained Kathleen Crandell, Ph.D., a nutritionist for Kentucky Equine Research.

The exact reason horses crib remains unknown. Some suggest that cribbing horses have unmet dietary or management needs. Others believe that altered biological functions are the culprits, such as decreased antioxidant levels or increased oxidative stress.

Because trace elements such as selenium, zinc, manganese, and copper protect the body from oxidative stress, one research group* recently explored the hypothesis that oxidation status may contribute to cribbing. To test this theory, blood samples were collected from horses during or immediately after an episode of cribbing and when cribbers were resting. Control horses with no known history of cribbing were also tested. Samples were analyzed for various markers of oxidation.

“The most important finding in this study was that serum selenium concentration was significantly lower in cribbing horses than in controls, with the lowest levels measured while horses were actually cribbing,” Crandell said.

Based on these data, the researchers concluded “that alterations in serum selenium, an important component of the antioxidant system, may play a role in the pathophysiology of cribbing behavior in horses, adding further evidence to the theory that cribbing may be related to increased oxidative stress and alterations in essential trace elements.”

Micronutrients imbalances can affect many physiological processes, which is one reason why Kentucky Equine Research nutrition advisors are available for consultation. They can help with feed analysis, recommend ration fortifiers containing vitamins and minerals such as Micro-Max (Gold Pellet in Australia), and antioxidants such as Nanoâ€¢E, a water-soluble, natural-source of vitamin E, and Preserve PS (Preserve in Australia) to provide natural-source vitamin E, vitamin C, and other antioxidants.