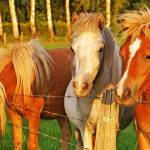 Phosphate has a hand in numerous physiological systems, most notably in energy equilibrium. When phosphate levels fall below normal, a condition called hypophosphatemia, muscle weakness, respiratory collapse, and heart failure could occur, though clinical signs of hypophosphatemia are not well documented in horses. Researchers in Australia recently described a case of severe phosphate deficiency in a Miniature Horse being treated for hyperlipidemia.*

Hyperlipidemia is common in miniature breeds that are not consuming sufficient calories to maintain normal body processes, especially when dietary restriction is sudden. The condition occurs most frequently when caretakers are trying to quickly reduce the body condition of small ponies and Miniature Horses in a short period of time. Hyperlipidemia occurs primarily because triglycerides are generated and released efficiently from the liver and into circulation in these small breeds. Researchers have also suggested that the relationship of glucose, insulin, and lipids may factor in the development of hyperlipidemia.

In hospital settings, triglyceride concentrations are measured routinely in at-risk patients. Coupled with appropriate nutritional support, hyperlipidemia is not frequently a cause of death in affected individuals. Hypophosphatemia is, however, linked to hyperlipidemia in horses and may influence survival of patients if unrecognized.

The Miniature Horse in the case report was admitted with a body condition score of 7, considered fleshy on the body condition spectrum, with a history of colic that was unyielding to medical management. After a comprehensive physical examination and lab workup, exploratory surgery was performed. Gas distention of the large colon was remedied and a fecalith removed from the transverse colon.

The horse was alert for the first 30 hours after surgery but then became dull and unresponsive to stimuli. The horse also experienced rapid heart rate, elevated respiration rate, and muscle fasciculations, especially in the hindquarters. A complete plasma biochemistry panel revealed a normal profile except for extremely low phosphate concentration. Appropriate measures were taken to raise phosphate levels, primarily the provision of intravenous potassium phosphate. By the third day of hospitalization, and 54 hours after surgery, the horse once again appeared bright and responsive. Heart and respiration rate were normal, and there were no indications of muscle fasciculations. Phosphate concentration improved and hyperlipidemia resolved completely. Six months later, the horse remained healthy.

“Maintaining horses and ponies in appropriate body weight is one way to help sidestep hyperlipidemia and hypophosphatemia,” said Laura Petroski-Rose, B.V.M.S., a veterinarian for Kentucky Equine Research. “While the problem isn’t a common one, and tends to manifest in a certain subgroup of horses, this case study emphasizes the need to keep horses in a healthy body weight from month to month, season to season, and year to year. This is especially important for easy keepers.”

Do you need help figuring out an appropriate diet for your new horse? Do you own a pleasantly pudgy horse that needs a dietary overhaul? If you do, it’s nothing to be ashamed of, but time is of the essence. The nutrition advisors at Kentucky Equine Research can formulate a diet and exercise plan that’s right for your horse. Contact them today.

What Are the Effects of Carbohydrate Intake on Heart Rate Variability in Horses?

Antianxiety Supplements: Do They Work In Horses?