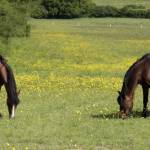 Pop quiz: When does an equine fetus undergo the most profound growth and development?

Youâ€™re right! It was a trick question.

Fetal foals gain about 1 lb (0.45 kg) a day during the last 90 days of gestation. Sure, thatâ€™s impressive, but consider for a moment that in a split second, a single sperm fertilizes a single egg to produce a single cell with a complete set of DNA. That one cell immediately begins dividing, forming a multicelled embryo with a functional circulatory system, rudimentary organ systems, and placentaÂ beforeeven leaving the oviduct and entering the uterus.

The rapidly growing embryo then takes on the entire uterus, migrating and altering the uterine environment to ensure its viability. Finally, at around day 16 after fertilization, the embryo implants into the lining of the mareâ€™s uterus where it will remain until time of parturition.

According to a recent review on the topic*, Tom Stout, VetMB, Ph.D., of the Department of Equine Sciences at Utrecht University, in the Netherlands, â€œembryo-maternal dialog during the first month is essential not only to conceptus survival but also has more profound and long-lasting implications,â€ citingÂ epigenetic influenceÂ over the development of the fetus.

The embryoâ€™s meanderings combined with the delicate nature of the mareâ€™s uterus, propensity for infection and fluid retention, as well as myriad other causes, contribute to a high rate of early embryonic death.

Every breeding season, veterinarians pull out all the stops to get and keep mares in foal, yet sometimes lament the conditions they must work with; at times they are referring to body condition and nutritional well-being. By feeding broodmares appropriately in the months prior to breeding, the likelihood of pregnancy increases.

â€œThis is especially true when mares are offered omega-3 fatty acid supplements prior to pregnancy and throughout gestation and lactation,â€ advised Crandell.

KER offersÂ EOâ€¢3, a potent, marine-based source of fish oil containing both EPA and DHA that provide a multitude of benefits toÂ broodmaresÂ and their foals.