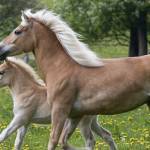 Late in gestation, mares have a high demand for energy to support the growing fetus. There is some speculation that the physical presence of the maturing fetus decreases the volume of the intestinal tract, potentially decreasing overall dry matter intake. Other studies refute that theory and suggest dry matter intake is related to energy needs rather than the volume of the gastrointestinal tract.

Thus, it remains unclear whether there is a need to supplement concentrates late in gestation to compensate for the potential decrease in dry matter intake. American researchers* measured body weight, body condition score, and rump fat in mares that were fed hay only or both hay and concentrates.

The study authors identified a number of interesting findings:

All included mares exceeded the currently recommended energy requirements outlined by the Nutrient Research Council (NRC). The lack of agreement between mare body weight and NRC guidelines supports the need for additional research in gestating mares.

In the meantime, critically analyze your pregnant mareâ€™s actual intake of hay and/or concentrates together with her body condition score both pre- and postpartum to maximize the health of both mare and foal.

Why Is Tall Fescue Problematic for Pregnant Mares?

What Are the Effects of Nonstructural Carbohydrate Intake on Glycogen Repletion After Intense Exercise?
Free WordPress Themes