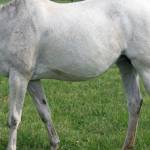 Chronic uterine infections in mares are difficult to treat, causing frustration and financial loss to those invested in the equine industry.

Recently, a group of researchers* looked at 20 mares inoculated with Pseudomonas aeruginosa, which is a type of bacteria known to produce a biofilm. “A biofilm consists of colonies of bacteria encased in and protected by slimy layers, which are difficult to eradicate with antibiotics alone,” explained Laura Petroski-Rose, B.V.M.S., a Kentucky Equine Research veterinarian.

Once inoculated with the bacteria, the mares developed uterine infections, which was then either treated with the antibiotic ceftiofur, treated with a combination of ceftiofur and tris-EDTA, or not treated at all. Tris-EDTA is a sterile buffer prepared from highly purified reagents that is thought to potentiate the actions of antimicrobials. Two weeks after the completion of treatment, samples were collected from each uterus and an ultrasound was performed to assess the outcome.

“A combination of antibiotics and tris-EDTA proved successful in penetrating the resistant biofilm matrix, and thus clear the uterus of infection,” noted Petroski-Rose. “This is good news for the horse industry, as more mares suffering from endometritis may experience successful treatment outcomes.”

While research continues on this topic, it can be helpful to incorporate nutritional supplements into mare diets, especially those with natural anti-inflammatory properties, such as Nano-Q10 and Nano-E, from Kentucky Equine Research.

Safety of Clodronate in Horses with Navicular