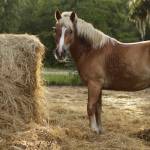 Because of the work of many researchers, widespread recognition of insulin dysregulation in horses has been achieved. Until now, however, a safe, effective medication or cure has remained elusive. Thanks to the efforts of an Australian research team, a human medical treatment called velagliflozin may help fill this void*.

To achieve these goals, forage analysis, hay soaking, grazing muzzles, pasture rotation, and a nutrition consultation may be required.

“Adding omega-3 fatty acids to the diets of some animals in average body condition could also prove beneficial. Look for DHA and EPA, found in a marine-derived product like EO-3,” Crandell advised.

While these methods benefit horses with insulin dysregulation, improved means of treating the disease would be welcomed by horse owners and veterinarians alike. Borrowing the idea from human medicine, Meier and coworkers examined the use of velagliflozin.

“This medication increases the excretion of insulin in urine to help reduce insulin levels circulating in the bloodstream, especially following a meal,” Crandell said.

To test both safety and efficacy of velagliflozin, 24 horses with insulin dysregulation were recruited. Half of those horses received a placebo, while the remaining horses were administered 0.3 mg/kg velagliflozin once daily for 16 weeks. All horses were overweight and offered the same diet during the study period.

According to Crandell, “This would be a great addition to the limited treatment options for horses and ponies with insulin dysregulation. We will be anxiously awaiting additional research in this area.”

Working Oil Into Your Horse’s Diet