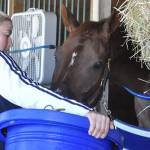 Due to the risk of laminitis, horses should not be subjected to abrupt feed changes. The rapid ingestion of unfamiliar concentrates or other feeds high in starch can induce the painful, life-threatening disease, which is characterized by the separation of the hoof wall from the coffin bone.

â€œAside from the potential for laminitis, the sudden addition of feeds rich in dietary starch may cause an alteration in the intestinal microbiome,â€ explained Kathleen Crandell, Ph.D., a nutritionist with Kentucky Equine Research.

The microbiome includes bacteria, fungi, and other microorganisms that help digest fiber and maintain the health of the intestinal tract. That population of microbes forms early in a horseâ€™s life and fluctuates based on diet, transport, stress, exercise, weight loss, and disease state, among other factors.

â€œIn the case of sudden diet changes, that microbiome will also change and not always in a positive way,â€ Crandell said. â€œAlterations can adversely affect digestive health and lead to diarrhea, colic, and other forms of intestinal upset.â€

In an ideal world, horses would not be faced with unexpected diet changes, but certain situations sometimes call for impromptu dietary supplementation. â€œPerformance horses that require additional calories or other nutrients are often offered concentrates high in water-soluble carbohydrates with no adaptation period,â€ offered Crandell as an example.

While many horses can tolerate the additional starch, one study* recently demonstrated that horses usually offered a forage-based diet and then given concentrates did indeed â€œsuffer the consequences,â€ much like humans during the holidays.

For horses sensitive to dietary changes, consider offering a nutritional buffer such as EquiShureÂ to maximize the health of the intestinal microbiome.Â EquiShureÂ is a time-released hindgut buffer that helps minimize pH changes, like those observed in this study, induced by precipitously altering a horseâ€™s diet.

â€œIn addition, consult with aÂ KER equine nutrition advisor to find alternate strategies for ensuring your horses receive all the energy and nutrients they need to perform their best,â€ advised Crandell.