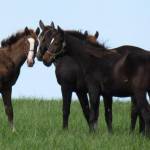 The purpose of this study was to evaluate if there is a relationship between a glycemic response test and the incidence of osteochodritis dissecans (OCD) in Thoroughbred weanlings, and to determine if this test would be useful in identifying factors that may predispose young growing horses to OCD.

A total of 218 Thoroughbred weanlings on six central Kentucky farms were studied during December 1999 and January 2000. A glycemic response test was conducted by feeding a meal that consisted of the weanlingâ€™s normal concentrate at a level of intake equal to 1.4 g nonstructural carbohydrate/kg body weight. A single blood sample was taken 120 min post feeding for the determination of plasma glucose and insulin concentrations. The glycemic index of each feed was also determined. Overall incidence of OCD on these farms was recorded until the horses were sold as yearlings.

Plasma glucose and insulin were significantly higher in weanlings with OCD than in unaffected foals. Foals that were heavier than average tended to be affected more often than foals that were lighter than average. There were strong positive correlations between mean glucose and insulin response on each farm and the incidence of OCD, and also between the glycemic index of each farmâ€™s feed and the farmâ€™s weanling glucose response. Based on the results of this study, it would be prudent to feed foals concentrates that produce low glycemic responses.

This report of KERâ€™s 2001 research was published inÂ Proceedings of the American Association of Equine Practitioners Annual Convention.

Read the entire research paper, titledÂ The Relationship Between Glycemic Response and the Incidence of OCD in Thoroughbred Weanlings-A Field Study.

The Young Years: Nutrition from Birth to Two Years of Age

What Are the Total-Tract Digestibility and Glycemic Responses of Processed Corn in Sedentary Horses?
Free WordPress Themes