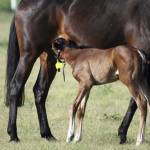 Though vitamin K may be forever linked with blood coagulation, its influence stretches beyond clotting to other body processes, including fertility, insulin sensitivity, cardiovascular health, and skeletal strength. Researchers recently set out to determine if supplementing lactating mares with vitamin K affected vitamin K concentrations in the plasma of their foals*.

Twelve lactating mares were divided into two groups, control and supplemented. Control mares received a plain carrier paste, while supplemented mares received a paste loaded with 15 mg of soluble vitamin K. Pastes were given immediately after foaling, every second day for two weeks, and three times a week thereafter until 98 days after foaling. Blood samples were taken from the foals before they nursed and then again at 12 hours, 24 hours, 7 days, 14 days, 28 days, 56 days, and 98 days. Plasma was derived from those samples and the phylloquinone concentrations were measured. (Phylloquinone is a dietary form of vitamin K.)

In this study, oral administration of vitamin K in mares did not result in changes to vitamin K concentrations in foal plasma, though researchers felt more study in this area is warranted.

“Until further work can be done with supplemental vitamin K, well-fortified diets containing concentrates formulated specifically for gestating and lactating mares or balancer pellets will provide all of the vitamins and minerals required for nutritional well-being so long as they’re fed according to the manufacturer’s recommendations,” said Catherine Whitehouse, M.S., a nutrition advisor at Kentucky Equine Research.

While vitamin and mineral levels are an integral part of nutritional management, energy remains a vital nutrient for lactating mares. “Without sufficient energy, mares will lose weight quickly, especially in the first few months of lactation, when milk production climbs to its peak,” she continued.

Do you want to be sure you’re feeding your mare the best diet for her situation? Contact a Kentucky Equine Research nutrition advisor for a consultation today.

What Is the Best Design for Urine Collection in Equine Fractional Excretion Studies?

Nutritional Considerations for Foals at Weaning