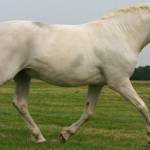 Although helpful for many painful and inflammatory conditions,Â nonsteroidal anti-inflammatory drugsÂ (NSAIDs), such as phenylbutazone or â€œbute,â€ can cause gastric ulcers, especiallyÂ glandular gastric ulcers. In turn,Â gastric ulcersÂ result in pain, body condition changes, and poor athletic performance.

â€œResearchers and veterinarians once believed that NSAIDs caused gastric ulcers due to a suppression of prostaglandin production in the gastrointestinal system,â€ explained Kathleen Crandell, Ph.D., a nutritionist withÂ Kentucky Equine ResearchÂ (KER).

Prostaglandins constitute a group of fatty molecules that play a plethora of roles in the body, including hormone-like activities, modulating inflammation, and controlling body temperature and smooth muscle contraction, to name only a few.

â€œFew data, if any, support the idea that a decrease in protective prostaglandin in the lining of the stomach wall caused by NSAIDs actually induces gastric ulceration,â€ noted Crandell.

In a recent study*, a group of Canadian researchers dove deeper into NSAID-induced gastric ulcers to attain a better understanding of the disease. A standard dose of phenylbutazone was administered to six horses for 7 days, while another six horses served as untreated controls. On days 0, 3, and 7 of the study, all horses underwent gastroscopy (direct examination of the stomach via an endoscope). The severity of gastric ulceration, if present, was recorded, biopsies of the stomach were obtained, and PGE2 levels were measured.

â€œThese data suggest that a decrease in PGE2 levels alone do not explain why horses treated with certain NSAIDs have an increased risk of gastric ulcers. Further research, as the research team indicated, is needed to help protect horses that require NSAID therapy,â€ Crandell concluded.

When NSAID therapy is warranted for your horse, consider protecting not only the stomach lining but also other regions of the gastrointestinal tract that can be damaged during NSAID administration.