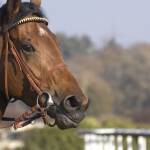 The study used five Thoroughbreds with RER and three healthy Thoroughbreds (control horses). Rations were formulated to meet (low-grain and fat rations) or exceed (high-grain ration) daily energy requirements. Each ration was fed to horses in a crossover design for three weeks. Horses were exercised on a treadmill Monday through Friday; maximum speed on Monday and Friday was 11 m/s (6% slope), on Tuesday and Thursday was 9 m/s, and on Wednesday was 4.5 m/s. Plasma CK activity and lactate concentration were determined before and after exercise.

Rations high in grain and formulated to exceed daily energy requirements may increase episodes of rhabdomyolysis in Thoroughbred horses susceptible to RER.

This report of KERâ€™s 2000 research was published inÂ American Journal of Veterinary Research.