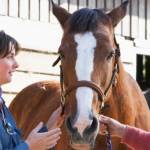 Horses and ponies with insulin dysregulation produce too much insulin in response to dietary carbohydrates and, over time, often leads to laminitis. Though researchers can document these insulin spikes easily enough, they do not know why they occur. Researchers recently looked closely at a specific hormone that might help unlock the insulin-laminitis mystery.

In all horses, this hormone, glucagon-like peptide-1 (GLP-1), is released from the intestinal wall during digestion of certain carbohydrates, and release of GLP-1 helps stimulate pancreatic insulin production. Horses prone to laminitis have shown greater plasma GLP-1 in response to grain meals, but researchers did not know whether GLP-1 was actually responsible for the extreme insulin response. Therefore, they set out to block GLP-1 receptors to determine if the hormone plays an important role in excessive insulin excretion in horses diagnosed with insulin dysregulation when fed a high-glycemic meal.*

Five mature, obese ponies known to have insulin dysregulation were given a feed challenge. They were administered a GLP-1 receptor-blocking peptide, known to block the activation of the receptor in several species and in in vitro studies of equine pancreatic explants (cells or tissues). Ponies were then fed a high-starch meal containing micronized corn, soybean hulls, and alfalfa (lucerne) chaff. Insulin, glucose, and GLP-1 were measured in blood samples.

The results? First, this study confirmed that high levels of GLP-1 in horses with insulin dysregulation contribute to excessive insulin production. Second, blocking the receptor partially reduced insulin production in response to a high-starch diet. It is not known whether the amount of receptor blocker was optimal, meaning it might be possible to achieve an even greater blocking effect, though this would require more study with varying doses. As it stands, GLP-1 receptors are a “potential therapeutic target for preventing laminitis,” according to the researchers.

Every scientific study takes us one step closer to understanding the role of insulin in laminitis. “Until a cure is found, management remains a key strategy for horses with insulin dysregulation or those predisposed to it,” said Catherine Whitehouse, M.S., a nutritionist at Kentucky Equine Research.