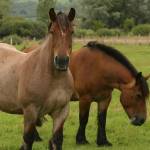 Though tall fescue should be avoided on certain horse operations, especially those catering specifically to breeding and foaling, its widespread use on other horse farms speaks volumes for its value as a forage. Tall fescue covers over 35 million acres (15 million hectares) of the eastern United States alone, and an estimated 700,000 horses graze or are fed tall fescue without incident.

Because of the well-documented problems with broodmares, some horsemen refuse to seed pastures with tall fescue and persist in eradicating it from established pastures, even on farms without broodmares. Before banishing tall fescue from your operation, consider the following facts:

â€œBe aware, however, that endophyte-free fescue is not as persistent or hardy as the infected varieties. Another option that produces a hardier stand is the â€˜novelâ€™ endophyte fescue in which the fescue plant is infected with an endophyte that does not produce the toxin,â€ Crandell explained. â€œDespite the benefits of tall fescue, the only way to avoid fescue toxicosis is to completely avoid this forage late in gestation. For alternate feeding strategies, contact a Kentucky Equine Research nutrition advisor.â€

Why Is Tall Fescue Problematic for Pregnant Mares?

Protein and energy in forage for horses

What Is the Best Design for Urine Collection in Equine Fractional Excretion Studies?
Free WordPress Themes