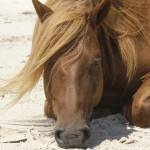 In days long gone, bezoars, which are indigestible concretions of the gastrointestinal system, were thought to possess magical properties. In today’s day and age, and based on available data, we’re now certain they’re simply a pain in the gut!

“Bezoars occur relatively rarely. When they do, they cause problems like colic and obstructions in foals and horses,” shared Kathleen Crandell, Ph.D., a Kentucky Equine Research nutritionist.

Various gastrointestinal concretions can develop in horses, including:

As recently described, pharmacobezoars* can also cause colic due to physical blockage of ingesta in the stomach and intestines. The case report describes a 15-year-old Arabian mare that was offered psyllium, a product often used to treat or prevent sand colic, and ultimately resulted in her death.

“The psyllium pellets fed to this mare apparently absorbed water, congealed, and served as the foundation for two bezoars,” described Crandell.

In this case, the mare was fed four times the suggested amount of psyllium pellets. As such, the veterinarians attending the case strongly encouraged owners to not use psyllium pellets “off label” or against the manufacturer’s recommendations.

“Instead of offering psyllium for sand colic, consider changes in feeding management. For example, avoid feeding on sandy soils by providing abundant amounts of hay in a rack or slow-feeding device preferably with rubber mats underneath,” advised Crandell. “Check with a veterinarian about the advisability of giving any horse psyllium or another preventive product on a regular basis. Further, be sure the horse always has access to clean water.”

What Are the Total-Tract Digestibility and Glycemic Responses of Processed Corn in Sedentary Horses?
Free WordPress Themes