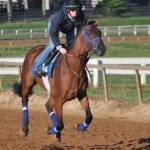 A study to evaluate the long-term effects of feeding a fat-supplemented diet during medium intensity aerobic training was conducted over seven months using 12 two-year-old Thoroughbreds.

Six horses in the control group were fed grass hay and a fortified sweet feed (CON), and six horses in the other group (FAT) received hay, sweet feed, a supplement pellet, and 400 ml of soybean oil that supplied about 12% of the dietary energy intake of the FAT group. After 2, 4, and 7 months, the horses performed two standardized exercise tests (SET) on a high-speed treadmill. The first test (STEP) consisted of sequential steps of 800 m at speeds of about 4, 8, 9, 10, and 11 m/s. Oxygen consumption and lactate level increased with training, but were not different between treatment groups. During the last STEP, insulin was higher post feeding in the CON horses. Blood glucose was lower at the end of the STEP in CON horses. The second test (SET30) consisted of 30 min of trotting at about 4 m/s. Cortisol was elevated during exercise in the CON horses during the last SET30.

Thyroxine, a thyroid hormone, was unaffected by diet or exercise. Consuming a fat-supplemented diet altered the insulin response after feeding, and this may have prevented a fall in blood glucose during strenuous exercise. Feeding a fat supplemented diet to two-year-old Thoroughbreds during training did not change red or white blood cell numbers or liver function as measured by serum levels of AST, GT, and SDH. Fat-supplemented diets can be fed safely for extended periods of time to horses in training.

This report of KERâ€™s 1991 research was published inÂ Proceedings of the 12th Equine Nutrition and Physiology Society Symposium.